I’d like to share two videos with you! The first one is the video I just added to my blog post about The Fox & The Fish, presenting the game and the backstory:

The second one is the february result presentation video from my very own Berlin Mini Game Jam:

I’m always amazed with what the other participants come up in such a short time! If you are living in or near Berlin, you definitely have to join us for one of the jams. We’re doing monthly 8 hour game jams about themes we vote on democratically. It’s quite relaxed, no competition going on, and a lot of fun. Also it’s not just for programmers (as some people seem to think) – we are jamming with all the disciplines, from artists to game designers to musicians, and get all kinds of results. So far we had: Digital prototypes, board games, card games, physical games, interactive fiction and pure concepts. And it’s getting quite popular lately – last jam we had over 35 participants. Youngest one was 9 years, making a game all on his own with Kodu!

For the September Mini Game Jam, I worked together with Martin Topolski (check out his art, he rocks!). His idea was to make a co-op game with asymmetric roles and energy transfer as a core concept:

That being said, I present: 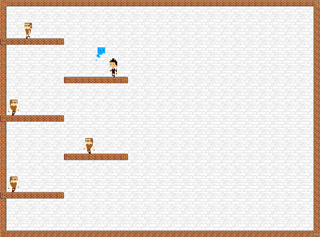 He imagined it as a jump ‘n’ run – which probably needs an editor to be made smoothly. Using a text-based level format might have been the smarter choice, but I decided that I might as well try to figure out Stencyl after seeing a fellow jammer coming up with remarkable results. The next 4 1/2 hours I spent in varying degrees of pain, until I finally decided to drop Stencyl and never ever use it again. (I’m not saying that Stencyl is bad; it’s not. It just has a few problems and is obviously not for me.)

3 1/2 hours left were obviously not enough, even after reducing it to a single screen platformer. I pretty much only finished what you see in the screenshot above, which is a damn shame because the concept is so promising. For obvious reasons I won’t post the prototype, I’d just waste everyone’s time. Instead I’ll give you some cool sprite sheets done by Martin: 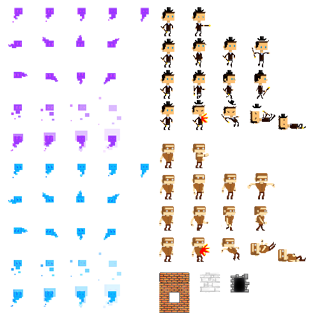 So – is this going anywhere? Possibly! Martin and I, we deviated on the focus of the game: He still wants to do a jump ‘n’ run, and I felt the game would be cooler as an arcade single-screen platformer. Martin is now doing his version with a friend, and I’ll link here once they have something to show.

As for me, I might make my arcade version someday.

And the next one in our history series! This protoype sadly never quite left the concept phase – which is sad, because the concept sounded a like it’s lot of fun. One of our Berlin Mini Game Jams more than one year ago had the themes “anti coop” and “Together until the end”, and here’s what Iwan and me dreamed up: 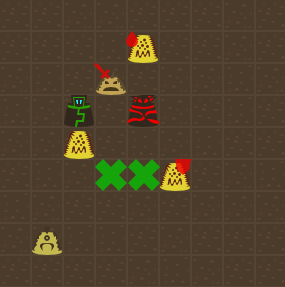 You are an evil mage, and on the verge of completing
the ancient spell that will make you immortal.

There’s only one step left: You have to die – at the
hands of one of the creatures you summoned.

You draw the magic circle and begin the incantations.

You summon the creature. It prepares to strike you.

You prepare to die and to rise again to unhol–

The door is reduced to splinters by the paladin bursting through it.
Killing the monster in one swift blow. Healing you.

And the spell won’t last forever…

Now one of the players, the Mad Mage, has to kill himself, while the Powerful Paladin has to keep him (and himself) alive until the spell times out.

Sadly in my folly I tried to make it an online multiplayer game, which proved to be a task too daunting for 8 hours, so it was never finished. I’ve learned my lesson!*

You can see the assets on OpenGameArt. Free for use too!

*) It’s highly unlikely that I’ll ever learn my lesson regarding jams and ambitious ideas.

My post about the prototypes I made for the BIGJam 2011 just got an update!

This quirky snake-like just got elevated from a toy to an actual playable game prototype with this update. Compete with a friend to be the first to save 40 cats! Dodge the very very advanced AI of the scientist, and don’t let your friend snatch your kittens right before you can throw them to safety!

Since I’m showing my game around on the TIGForums, I thought I might as well leave a post here!

Catcher is a game about (surprise!) catching things! Especially geometric forms. (In SPACE!) With two spaceships, here depicted as circles. These two spaceships are connected by an energy line, which you will use to border your enemies and open a dimension rift by closing it – and thereby defeating anything inside! It features over two dozen unique enemies on more than 30 levels. :)

Among the various things yet to be done, the most notably one is the tutorial. I hope you can get it together alone with a description of the keys and the menu entry “Demo“:

(It is Java Web Start, so no installation or unzipping needed :) )

While all and every feedback is appreciated, I especially want to know:

For the last months it was pretty silent here. So does this mean I turned my back to game development? Actually, no – it just means I am busy with projects bigger than a 7-days-prototype.

The first project I was working on is called Catcher. It began as a university homework and evolved into the first game project I ever started to make and was really determined to finish. Sadly my laptop was stolen, and while I have the latest (playable :) ) binary, the latest code backup is a bit older. I will have to rework a bit before I can publish it – and a few things like sound, music and polish are still missing entirely.

Furthermore I am working with some friends on an as of now unnamed multiplayer-tower-defense with the working title Netwars, which had reached quite a state but wasn’t yet playable. The thief stole me a month work on that, but since I really like this project I will work hard to make up for it!

And the best thing last: I am working with some students of the Games Academy Berlin on an as yet undisclosed Facebook Flash Game. Fame and fortune, here I come! :) (I am really excited about that and look forward to present it to all of you!)