A few months ago, I’ve been to the Gamestorm X Body Play Jam – a game jam about making physical games which use the players’ bodies as the central element. And what a jam it was! The ideas were flowing, and our team of four (comprised of Xanto, Juri, Nina and me) didn’t just finish with one, but two working games. To round the event off, the other games were incredibly fun to play as well and in the end I left exhausted from moving around so much, but satisfied.

Before I present the games, here is an awesome impression video from the jam. A huge thanks to the Gamestorm team for their filming and editing work!

Our first game: Dance it off!

The development of our first game started of really smooth: Juri suggested a dancing game (“I know nothing about dancing, but…”) where you get some kind of behaviour instructions and have to find your partner. After thinking of the board game Inkognito and pondering how to make partners identify themselves and what should happen if somebody wrongly thinks they found their partner, the game shifted a bit from “stealth/bluffing while finding the one partner” to just straight out “party”: Everybody gets 3 dance styles/moves (like “tango”, “picking apples” and “Michael Jackson”) and has to find their three partners as quickly as possible. The first one who achieves that wins the game!

Body Play Jam: Dance it off

Apart from a few hang-ups, the game worked really well. The only problem I can see is when one of the partners doesn’t know how a certain dance style looks like. This could be fixed by having a game master whose sole job is it to explain dance moves.

Developing this game teaches me once more not to give up too early. This is not a game we could test in our group of four, so I suggested we try to think in another direction instead (which resulted in the second game, so no regrets here!), but when we later had people to test it with, it turns out that it worked pretty much out of the box! The biggest thanks goes to Nina here – while we were pondering some details for the second game, she used the opportunity to playtest this one with the organizers and she singlehandedly created dozens of dance style cards.

Again after a suggestion by Juri (“I know nothing about biology, but…”), our second game was roughly based on the idea of cells absorbing other cells.

At least 8 players are formed into two teams, and in each team, players are paired up. The two players in each pair hold hands, thereby forming a small circle – and then they try to enclose enemy players in it, either by throwing their arms over an enemy player or by briefly letting go of their hands and then closing them again around an opponent.

Once you caught somebody, you yell “Slurp!” and the caught enemy has to let go of their partner and stay inside your circle where they can try to hinder you by being uncooperative when moving. Caught players can be freed again when one of the enclosing players is slurped.

When one team has caught a certain amount of enemies at the same time, they win!

The rules are sometimes slightly confusing to execute in the heat of the battle and it’s not always clear who caught who first, but the ensuing chaos was still a lot of fun.

Apart from us, there were two other groups. The first one made Cupcake Pupeeteers, an improv game where players are paired into puppets and puppeteers. The puppeteers are given a scenario (for example “Hogwarts”) and characters (Harry Potter, Voldemort etc.). Then they have to play the scenario out by moving their puppets – and the puppets have to guess in which scenario they are.

It was a bit hard to direct puppets bigger than you and I feel like the game would be better with commonplace scenarios (like “in the kitchen” or “at a shop”) instead of pop culture scenarios which needed specific knowledge, but overall it was quite enjoyable for either party – “masterfully” directing somebody else on one side and trying to deduce what the heck your movements are supposed to be on the other.

And here comes my favourite of the evening made by yet another group: A “yoga game” with a master teacher that has transcended so far that they can freely levitate, while the players have to try to imitate the teacher as closely as possible with the help of assistants.

To make this game possible, the teacher is actually lying on the floor. They are filmed by a camera and projected on a wall to make it seem like the teacher is upright instead of lying down.

The last player who is still in the game wins and is the teacher for the next round.

I can’t even begin to describe how much fun this game was! The concept itself is already funny, the strange moves of the teacher quickly become absurdly hilarious and even when I dropped out and became an assistant it was equally enjoyable and satisfying to help other players. My favourite part was when the teacher gently levitated of the “floor” and started swimming – first up, and then sideways and down, a point in the game where the assistants had to work as hard as the remaining players. 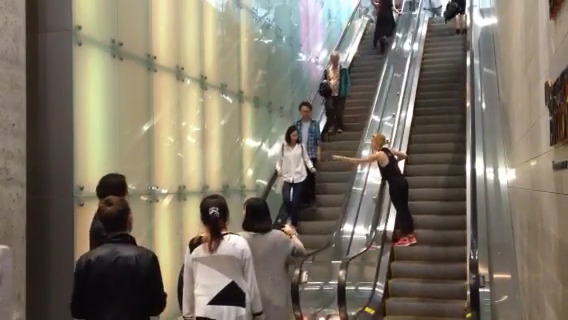