My post about the prototypes I made for the BIGJam 2011 just got an update!

This quirky snake-like just got elevated from a toy to an actual playable game prototype with this update. Compete with a friend to be the first to save 40 cats! Dodge the very very advanced AI of the scientist, and don’t let your friend snatch your kittens right before you can throw them to safety!

Last weekend my internship in Rotterdam ended, and not a moment to soon, since another epic event was just awaiting me in Berlin: This year’s BIGJam! A nice café, a couple of frantic 3 hour jams, drinks, good food and lot of awesome independent game developers, what more could you want?

And noooow I present you: The prototypes! 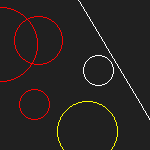 The first 3h jam started on Friday with the topics “zero gravity” and “acrobatics”. Since I was alone by then and sadly devoid of my trusty Bamboo, my secret third topic was “abstract”. And it seems that “acrobatics” got lost somewhere along the way… 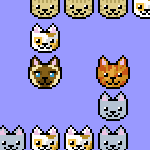 Saturday I was no longer alone: I had invited my ex-coworker Dominik, and we teamed up with an artist I met on friday: Tanja T-Rex. On our way to adventures and great prototypes we stumbled over the next topics: “free” / “cat”. Never turning down a challenge, onwards we went!

The result was another multiplayer game: Both of you are Savior Cats, freeing your brethren from the evil clutches of scientists who wanted to conduct their mad experiments on them! You couldn’t decide on which window is the safer one though – and now each Savior Cat tries to save as many cats as possible and throws them out of their own window.

Gameplay-wise it resembles a multiplayer-snake with a twist: You pick up cats by touching them, and then they follow you – but if another player (or scientist) touches a cat you carry, this cat and all of the following ones will now follow him! Play safe and only get a few cats to your window at a time, or be greedy and take the risk that somebody takes them from you because you cannot move them out of the way in time.

It is pretty fun and chaotic, the only thing preventing me from declaring it a complete success is that time ran out when we wanted to insert a crucial detail: The windows. Yeah, so far this game is without a goal. 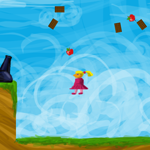 After the immense success of our last prototype we stayed together, and being in good spirits we went on to the next jam. This time it was “delicious” and the totally fitting “suicide”. Wait, what?

Many ideas were formed and discarded, and after a while we settled on one. And mind you, that is the most political correct one that my team found (I’m totally innocent): A food cannon over a valley shooting at participants of a sort-of eating contest. Chocolate and sweets make you fat, but apples, motion in general and jumping in particular is good for you and therefore to be avoided.

Definitely not the favorite of what we made, but it is playable and works. I like the concept of needing to move to win, but losing what you need to win by moving. 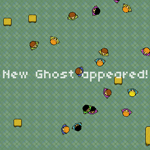 5 hours? Madness! Since you can do sooo much in 5 hours, we decided to be really indecisive: It took us well over an hour to find our cover and game idea for the “be inspired by a cover” jam. Finally we arrived at the cover Ghost, and resolved to take one of my old prototypes named “Ghost Hunter” to the next level.

Ghost Huntress features a silent and invisible (and probably female, “GhostHunter” was already taken in my workspace) protagonist specialised in ghost hunting, saving children from the growing spectral infestation taking place in an orphanage. The twist: You don’t see the ghosts! But the children do – and they will run away from them, and surely being eaten (actually just frightened, but we didn’t come around doing the sprites for that) if the ghosts aren’t captured. You have to deduce the ghost’s position by watching the children closely before you can catch the ghost with your trap.

A simple concept which proved to be fun! And there’s much we can add: Flickering candles which will expose the ghosts for the blink of an eye, detectors showing how near they are, walls which they cannot pass and other cool stuff. And yeah: We actually might.

Until then, don’t get scared while playing the: Ghost Huntress (Jam Version)

So long, and thanks for…

…all the jam! Contrary to last year, I am very content with my results this time: A nice prototype all alone, and three amazing ones done with fellow programmer Dominik (a long time coworker) and Tanja T-Rex (who I met at the jam) as artist. Many thanks to our organizer jstckr for his work – and thanks to everybody who attended and made the BIGJam the awesome thing it was!

Looking forward to the next one!

So, here is my first BIGJam 3 hour jam game/prototype/something: One Fish, Two Fish! The theme was “fish” and “attraction”.

The fishies follow the cursor when they are very young (and/)or want to make a baby. If they just made one, they will evade the cursor.

It’s more a failure than a prototype (much less a game), but it was worth a try :)

Somehow it also qualifies for the current EGP (“Zero Buttons”), but since it isn’t any good I won’t sent it in.

Trivia: The fishies like to stick together and make babies, it seems. Click here for an image of some fishcest…