Yup, I’ll make that the first section. I think the game turned out pretty well all in all, so I’ll let the best come last!

Not everything went right though. First and foremost: It took me hours and hours to get motivated. Motivation is my biggest problem when I work alone. I’m not too good with game design, and often I don’t see if a game can be great before it becomes great – which seldom happens in the first few hours. There are many moments on the first day where I wanted to give up. What helped me was to remember that I’ve felt this way before with other projects and they turned out great! And now I have another one of those.

What didn’t help either is that I have no definitive base code library, I extracted my base code from another project and had to delete stuff that doesn’t fit. And then post it here. It takes time, and I don’t feel too good about it as it goes a bit against the Ludum Dare spirit. I’ll take care of that soon and will have one for the next LD!

Unsurprisingly, the clock wasn’t kind to me. Two of the levels were created in 10 minutes before the deadline. The first level is my “easy” test level, and the fourth level is my “hard” test level. I didn’t even have time to test the two in between. The third level works quite well, the second is awful but at least it’s beatable in about 1 1/2 minutes…

The music doesn’t sound stealthy at all. I am no musician, so this is no surprise. I’m not sure if I want to put enough energy in this to get better just for the LDs, so I guess I’ll just have to deal with that. I should have added an option to turn it off though.

Probably the most important thing: I wrote a to-do list before I started. This is so incredibly helpful and I hope all of you are doing it. For those who are not, here are the benefits of doing it:

I had a level editor at hand. Mind you, it’s nothing fancy – it couldn’t be easier actually: 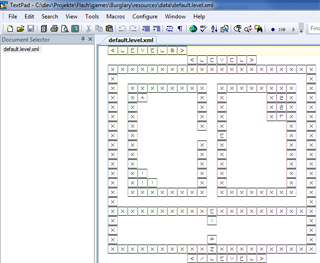 Yup, it’s just TextPad – with an XML file, shown with a slightly modified version of the Laser Systems font. It’s dead easy to parse. I’ll surly have something fancier in the future when I’m more established with games that actually need an editor, but for now its service was perfect.

It was 10 hours before the deadline. There was no time to be wasted. Yet I was idle browsing the FlashPunk forum without anything specific to look for. And guess what I found: TileLighting [1.0.1], made 6 days before the Ludum Dare. On an impulse, I spent 2 hours to integrate it. Here is the result:

Is there are lesson to be learned from that? I have no idea. All I know is that it made the game SO much better – it basically gave the game one of its major mechanics.

Speaking of major mechanics, I was 8 hours before the deadline and I had to decide which single feature on my huge to do list I wanted to implement – all others were to be discarded. I decided on lock-picking, and it turned out great. After the light became such an essential tool in the game, I decided to link the lock-picking to the lighting level – just how it would be the case in real life: The more light you have, the easier it is to do something hard. This feature received the most praise in the comments which makes me pretty happy!

Another important thing was that I focused on what I can do best: Gameplay. I could’ve spent more time on the graphics, but then it still wouldn’t look good and be much less fun. I think the abstract graphics are working well for the time being.

Another good thing was that I inserted sound effects and music. They might not sound as well as in other games where the developers actually know what they are doing, but it’s still a vast improvement to silence! I think I did both in 1 1/2 hours. With 48 hours in total, there is no excuse not to add them.

Here’s one more on gameplay: Enemies don’t have to be intelligent, they just have to work and be fun. I thought about implementing pathfinding, but took a far easier route in the end and I fare just as well: 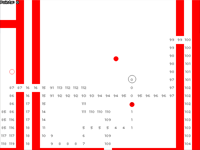 And yup, that’s it. Just going straight for a point, then following a trail the player leaves. It’s was rather easy to make and is a lot of fun to play against!

I have no idea how much impact the fact that I made a gameplay video had, but I think it was a pretty good idea. It can give people a sense of the game if they don’t have enough time or incentive to play it and it can provide basic instructions for those who don’t like to read and can’t figure it out by just playing. It’s not hard to make, it doesn’t take much time and you can do it after the deadline: You should definitely make one too!

Some things were learned

Some features were discarded

Are you interested in what I wanted to implement, but ran out of time to do? Here is a quick breakdown:

I don’t want to elaborate on these, just give a quick impression, but it’s such a pity that some of them are missing! I wanted to have lasers as obstacles, maybe switching on and off, traps to force you to have a higher light level (and maybe a trap disarming mini game), an alarm level slowly escalating difficulty when you’re seen, enemies shooting at you, and my favourite: Dynamite to break walls, but alerting every guard even if they can’t see you.

But well, you can only do so much in 48 hours. All in all, I’m pretty happy with the result. It’s a very good feeling I did that all on my own, and I am glad I participated!

Some thanks are offered

Thanks to the Ludum Dare organizers and to the great, great community! You guys have made a wonderful thing here and are doing all of this in your free time and it is so much appreciated! I cannot believe how many games were made, and how many kind comments I got on my game – I’ve seldom experienced such a friendly community. I had a great time and I will definitely participate again!

Do you have any questions I didn’t elaborate on? I’ll happily answer them in the comments! And you could leave a little comment if you enjoyed reading this or what you rather wanted to read.

Apropos, one last thing: Thanks a lot for reading this postmortem! It hope you enjoyed it as much as I enjoyed writing it. (And it’s probably pretty obvious, but maybe you want to follow this other conveniently placed link and leave a comment there or here? Your feedback means a lot to me!)