A few weeks ago I visited the A MAZE./Berlin Festival. Apart from showing Catcher and talking to lots of other indie devs, I also visited the #weirdkids workshop on digital improvisation and made a weird glitch art thing with the base projects they gave us. Proudly presenting: 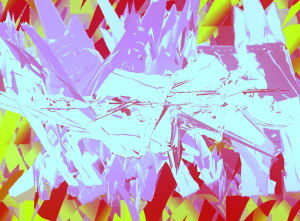 (If you have epilepsy, don’t click on the following links!)

Start it right in your browser!

When Fernando and Christoffer told me to give them a build after the workshop, I thought it would be shown in a presentation for a few seconds. Instead, I later found out that it was shown in the cellar exhibition. So cool!

press c to cat wasn’t made for long exhibitions at all though – the cats spawned automatically, but never despawned! So soon, it looked like this, with no cats recognizable anymore, haha.

When I entered the exhibition space, there were lots of people sitting in a circle in front of the exhibits – and it turns out they all had wondered about this strange cat game that seemingly contained no cats, only glitchy geometry. I restarted it – and finally they saw the cat and went “Ooooh”, haha. It was awesome!

After the festival, I got some reviews on Twitter too:

Also, lying next to the monitor, I found the BEST THING EVER – a short fanfiction!

Responsible for this lovely work of poetry are Titouan Millet, Max Cahill and Michal Marcinkowski. The first piece of fanfiction I ever received! Thanks a lot, guys!