Over the last two months, Christiaan Janssen and me started a little regular game jam at the moment called the Berlin Game Developers Meet-Up. Basically, we meet up, decide on a theme and then started making small prototypes about it, alone or in small teams. If you are interested in how it all started, the participiant Miguel Angel Alvarez asked us both and did a blog post about it. Here I want to tell you about what I did at the 4 jams so far, though!

Jam #1: Revenge of the Flying Spitballs 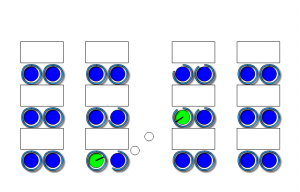 On the first jam I grouped up with Norbert Haacks, a game designer I met at the Global Game Jam in January. He came up with the idea: A fight in the classroom, like back in our school days with spitballs and sandwiches, trying not to be seen by the wary teacher. The “flying” is covered by the aerial weaponry, and the revenge part could’ve been (if time didn’t run out for us) that when you are hit, you have limited time for payback and doing extra damage! Sadly I felt the effects of the short timespan we had, and didn’t come very far – at least not far enough for the prototype to be worth an upload. Though development in Flash was pretty fast – I just needed a bit more pre-made classes and helper. 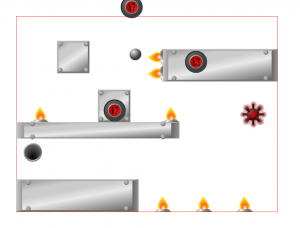 This time, I teamed up with the programmer Dominik and artist/programmer Kyrill. (And whew, it is SUCH a huge difference if you aren’t the only programmer in the team. And I guess the experience from the first jam helped me too, but I digress… back to topic!) The theme was “indirect control”, so we thought about controlling the environment in some way. After pondering a few ideas, we went with pseudo-magnetism. You have a little labyrinth-ish level and you’ll navigate the ball through it by placing magnets at the walls and the surroundings of the field, while being cautions not to touch the flames or the mines. Time ran out before we could do another level besides the one we were testing with, but it is playable, fun and it feels like it has potential.
See for yourself: http://dragonlab.de/projects/ballsOfSteel 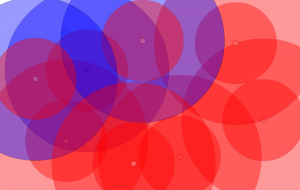 For this jam, I tried to do something solo to the topic “ghosts”. The idea is that you are a ghost hunter, and are trying to catch ghosts which are invisible to you. You should have various means to detect them (think radar or distance detector), things to attract and repel them, and finally something to catch them. You probably see by reading this description that I havn’t worked out the exact mechanics – well, working alone never did any good to me. So at this jam I mostly got frustrated, chilled, made smalltalk and experimented a bit: http://dragonlab.de/projects/ghosthunter 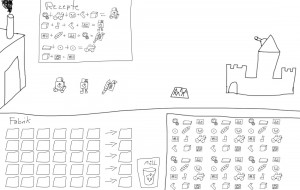 For the 4th jam Dominik and me teamed up again, featuring me as artist (haha). We didn’t like the theme “several contextual actions for one button”, so we tried to make something for the theme “invasion”. We were a bit too ambitious for 4 hours: We wante to make a game where you are a mad scientist trying to take over several strongholds with self-built robots. You have several “roboter recipes” from which you can choose and a material pool from where you can put things into the assembly line to build your robots, which will then start to attack. A bit too much as aforementioned – and so this was the jam Dominik and me decided that 4 hours are definitly too short and we should try something longer.

Since we all agreed that is was most certainly nice, but the 4 hours we had aren’t quite enough for us to produce something meaningful, we decided to raise the duration to 8 or 10 hours. The next jam is this Saturday, and I’m curious how it’ll turn out – I cannot come, sadly. Though: It won’t be the last! Expect more (and with more hours, better) prototypes!